MANHATTAN — It’s a scene from a musical comedy of the absurd, with a practical purpose, as staged on a West Harlem pier:

A talking flood sensor is holding a press conference.

“I’m just here to collect information about when and where there’s flooding, so you can have it,” says “Rainy Day Play” co-creator Sabina Sethi Unni, in character. “But right now I’m focusing on my new career. I’m doing a lot of experimental black and white Italian videography and I’m really excited about my new project.”

“Basically I get put onto tall poles and sense the difference between the ground and the top of the pole,” Sethi Unni says. “And then I can tell you how much it floods.”

About 50 people braved a chilly wind while the performers aimed to build a world exploring New Yorkers’ emotional relationship to rain—and the ways that neighbors can come together to meet disasters cooperatively.

The FloodNet map is designed to show where flooding is happening when storms hit the city.

Sethi Unni and co-creator Nikolas Michael—second-year Columbia graduate students who grew up in the New York area—met in their urban planning masters program. They became collaborators when they applied for the NYU FloodNet Artist in Residency program.

Critical information about FloodNet—a network of 24 sensors across the city that use ultrasonic technology to provide real-time information about flooding via this public dashboard—is woven among the play’s vignettes. 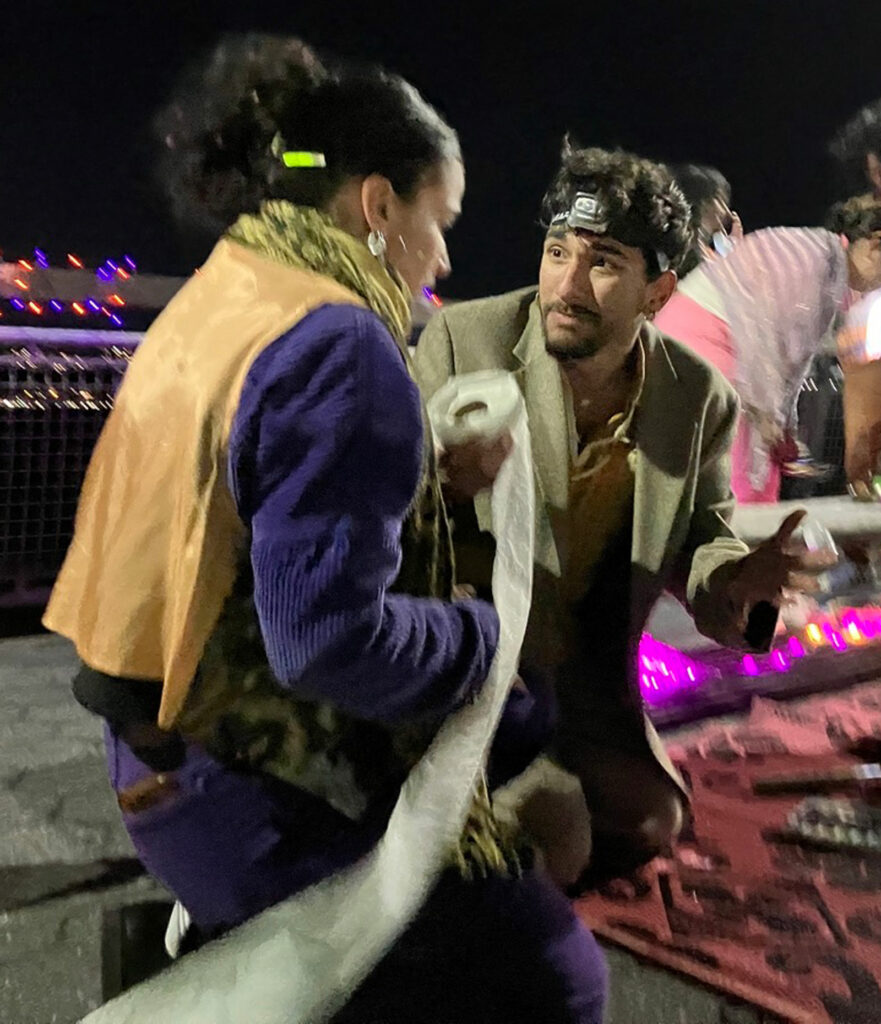 A new window into water

FloodNet’s sensors track where flooding happens minute by minute as storms hit the city. By building a more localized data set than had been available, residents can know when to evacuate a basement apartment, avoid toxic floodwaters on their block or move a car to higher ground. Right now it’s a small program, with plans to grow to 500 sensors. And anyone can suggest a location.

The project, a partnership between NYU, CUNY and the city, includes a community flood watch Facebook group. All New Yorkers can contribute to the project by filling out this survey during a storm.

Sethi Unni and Nikolas Michael, who have both experienced flooding in New York, see that it’s easy to overlook the historical environment of the city—until big storms arrive. When the remnants of Hurricane Ida brought death and destruction across New York last year, Queens was especially hard hit.

“New York is paved over,” Michael says, adding, “last summer when all that horrible stuff happened down the block from us in Hollis, my dad said, ‘Of course that flooded. Back in the day that was Rock Hollow Pond.’ But when you’re just moving here, you don’t know that.”

FloodNet is designed to address that lack of awareness, for newly arrived residents or New Yorkers moving between neighborhoods.

“There’s just this huge lack of institutional and historical knowledge about what to do for people who are just moving here,” Sethi Unni says.

The play’s the thing

Each “Rainy Day Play” performance—the first three have been staged at the Gowanus Dredgers Boathouse in Brooklyn, Edgemere Farm in Far Rockaway, Queens and in West Harlem, as part of the Sandy +10 conference marking the anniversary of the 2012 superstorm—adapts to its location.

“We focus a lot on the absurd parts of dealing with a disaster,  like playing cards in the dark or going to ask neighbors for toilet paper, really drawing out those small moments,” says Sethi Unni. “We want it to be more than just a play, we want to invite you into our home.”

From the start, the audience is invited to reflect on selected questions, including “What is your first memory of rain?” and “What was a time you leaned on a neighbor?”

Lucy McGowan, Brooklyn-born Bushwick resident and a City Year teacher, says the play had her thinking about her third graders.

“They don’t like it when it rains because they don’t get recess,” she says. “They actually get really upset. And me, I love sunshowers. And that foggy, nostalgic kind of rain, too. It made me think. The rain is beautiful but it has this dark side.” 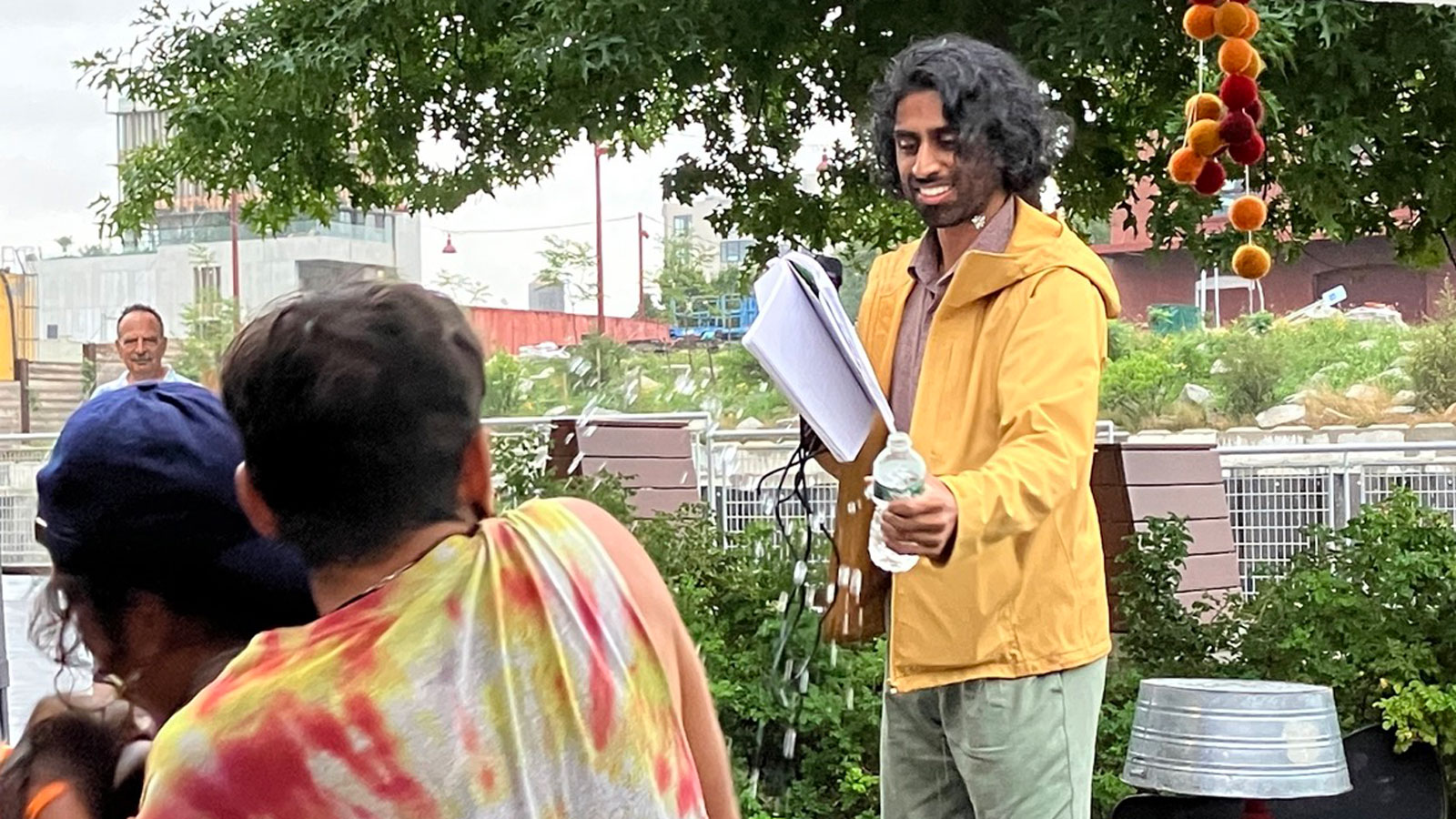 “Rainy Day Play” asks its audiences, including the one that gathered for a performance in Gowanus, to imagine the community connections that can be forged in storms.

Yet even the dangers bring an opportunity for connection. The play emphasizes the need for New Yorkers to support one another—even if it’s just by a flashlight—in the face of events that are out of our control.

Sethi Unni and Michael hope “Rainy Day Play” illustrates the interdependence of neighbors, memories and a sense of history as climate change brings unexpected challenges to the city. They want to inspire further conversation, encouraging people to, as one scene puts it, “be weird and ask our neighbors.”

“I lived in Coney Island and during Hurricane Sandy it was pretty rough,” said Ryan Ramirez, 24, an audience member who works in fine art sales. ”So it’s good that people are coming out to learn what to do when it’s flooding, in such a fun environment. I think especially in New York City, with a lot of new people coming in all the time, it’s important to know.”